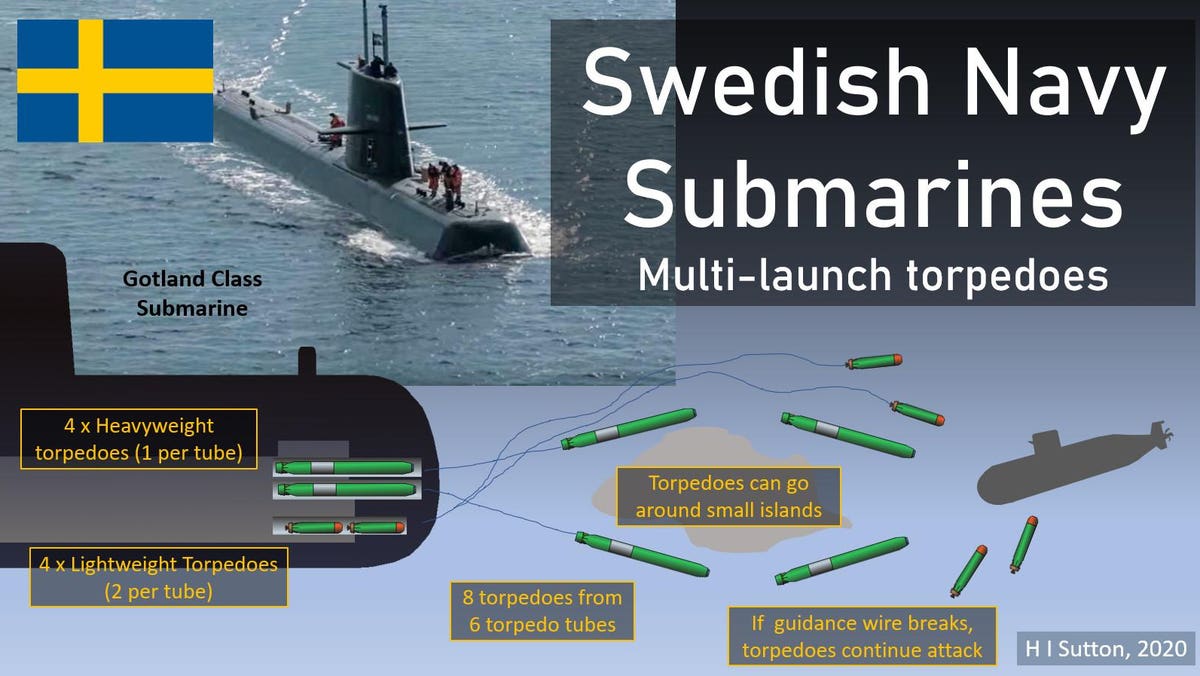 Thanks to trials with the U.S. Navy, Sweden’s submarines are famous for being stealthy. This is largely due to their Air-Independent Power (AIP) which allows them to stay submerged for much longer. It is not unique however as other countries now operate AIP submarines. But Swedish Navy submarines do have another capability which is unique. As well as regular torpedoes, they carry special lightweight ones. And this is where it gets secretive: they can launch two at the same time from a single tube.

Lightweight torpedoes being Swedish submarines is well documented. But the double-tap capability is not. It is known about in some corners of the defense community, but like many topics in underwater warfare it is talked about in hushed tones. Slowly word of this capability has crept out, particularly in Sweden, but it is still virtually unknown. And some details of the capability are still secret.

The weapons used are smaller than regular torpedoes but larger than most other ‘lightweight’ ones. They are optimized for to kill enemy submarines, although the latest models can also be used against small warships and even enemy torpedoes.

Unusually they are wire-guided which is normally only found on larger torpedoes. This allows the submarine to guide them all the way to the target. If the wire breaks, or is cut, then the torpedo goes into fire-and-forget mode using its own sonar. Wire-guidance has been found to be more reliable than fire-and-forget weapons in the confined and crowded Baltic. The torpedoes can be guided around an island to hit a target on the other side.

The service history of Sweden’s lightweight torpedoes started in 1963 with the introduction of ‘Torped-41’. Today Swedish submarines carry the 4th generation Torped-45 which entered service in the mid-1990s. The next-generation Torped-47 is expected to enter service in 2022. It will arm the current A-19 Gotland class and future A-26 Bleklinge Class.

Although Sweden is alone in deploying these torpedoes on submarines, other countries are looking at similar ones. The U.S. Navy drafted the Common Very Lightweight Torpedo (CVLWT) concept over 10 years ago. That weapon is appears to have morphed into the VLWT (Very Lightweight Torpedo) recently unveiled by Northrop Grumman
. Although that has been proposed for submarines at some point in the future, Sweden may have a unique capability for some years to come.

Did BTS’s Albums Improve On The Charts After Their Online Concert...

The SBA’s Decision To Give Churches And Other Faith-Based Organizations Payroll...

Tyrese Maxey Could Be Kentucky’s Next NBA Star

Joeboy Stares Down the Apocalypse in ‘Call’ Video

30 Under 30 Europe 2020: These Innovative Twentysomethings Are Rethinking Retail...

David & Lana Still Together Update on 90 Day Fiancé: Before...