Teyana Taylor Reveals Erykah Badu Will be her Midwife

Teyana Taylor, singer and wife of NBA player Iman Shumpert, recently revealed that they are expecting their second child together. In her video for her single “Wake Up,” she reveals a baby bump towards the end of the visual. The Harlem native said she has enlisted a R&B veteran to be her midwife: Erykah Badu.

During an interview with Nick Cannon for his “Nick Cannon Mornings” show, he asked if she was also going to deliver her second child at home. Taylor unexpectedly gave birth to her four-year-old daughter, Iman Tayla “Junie” Shumpert Jr., in her bathroom, which she revealed on Instagram.

“You know what’s crazy, even though the Junie story is crazy, it kind of put me in a comfort zone where I don’t—I  don’t know if I want to go to the hospital for this next baby,” she said. “I’ma make sure it’s not on the toilet or the bathroom floor. I’m considering home birth and I’m actually going to be doing it with Erykah.”

Taylor joked that she would have Badu serenade her while she is in labor.

“I’m super excited,”Taylor added. “So I’ma have her just sing her verse from ‘Lowkey’ for me to calm my nerves.”

Erykah Badu has Been Delivering Babies Since 2001

Erykah Badu: Delivering 40 Babies, Body Imaging, New Music & Having a Sweet Vag | Sway’s UniverseDJ Lo Down Loretta Brown! The incomparable, undeniable and incredible woman that is Erykah Badu, stopped by Sway in the Morning today. Not only is she a singer-songwriter, but she’s a record producer, activist, actress, DJ — and doula! Opening up the conversation, Sway reminisces on the first time they met in the 90’s and praising her for how far she has come. In fact, next weekend, November 29th, you can catch Ms. Badu hosting the Soul Train Awards. Not only is she hosting, but she’s also an Associate Producer with complete control of all her lines. That same week, November 27th, she’ll also be dropping her new album, But You Can’t Use My Phone. Describing her music as “sound(ing) like a mirror” soaking in the frequency around us. While in-studio she also opened up about being a doula. According to Google, “a birth companion and post-birth supporter, is a nonmedical person who assists a woman before, during, and/or after childbirth, as well as her spouse and/or family, by providing physical assistance and emotional support.” Telling us, she’s helped deliver 40 babies, as of today. Watch above as she also weighs in on nudity, having a sweet smelling pu**y, and her new music. http://ishootnyc.com Subscribe Here! http://bit.ly/SubscribeSU Watch the Best of Sway In The Morning! http://bit.ly/BestOfSITM Check out More From Sway’s Universe http://swaysuniverse.com http://twitter.com/swaysuniverse http://instagram.com/swaysuniverse http://facebook.com/swaysuniverse #SwaysUniverse About SWAY’s UNIVERSE Exclusive interviews from Sway Calloway and the Sway In The Morning/ SwaysUniverse.com team with some of today’s biggest celebrities, like Kevin Hart, Kanye West, Eminem, Usher, Jessica Alba, Steve Aoki, Torey Lanez, Julia Stiles and so much more. Erykah Badu: Delivering 40 Babies, Body Imaging, New Music & Having a Sweet Vag | Sway’s Universe https://www.youtube.com/watch?v=Z1WueWkUGpM Sway’s Universe https://www.youtube.com/UCuS96jkLKpTaGB_OWnwZV_A2015-11-21T03:31:55Z

Besides being a Grammy Award-winning artist, Erykah Badu has a gift for delivering children. During an interview on Sway in the Morning (which is above), she revealed she has helped deliver 40 babies. The “The Love of My Life” singer said after she helped her best friend give birth she decided to begin studying midwifery.

“My best friends, two of them – stic.man [of Dead Prez] and his wife Afya – were in labor and I was on a flight and he called me and said that, ‘Afya told me to let you know that she’s in labor.’ And I re-routed my flight – This was in 2001 – to go to be with them here in Brooklyn,” she said. “I just stayed up with her. Her labor was natural, for fifty-two hours. Fifty-two hours  and I stayed up with her. I didn’t get sleepy or anything. I was able to just be there for her, whatever it took – singing, coaching, walking, bouncing, massaging. I had just had my son, a live, natural birth at home as well, so I had a little bit of experience. After that, I felt that well I can do this. I can be the welcoming committee for new spirits coming in. That’s when I decided to start studying for it. I became a doula about five years ago.” 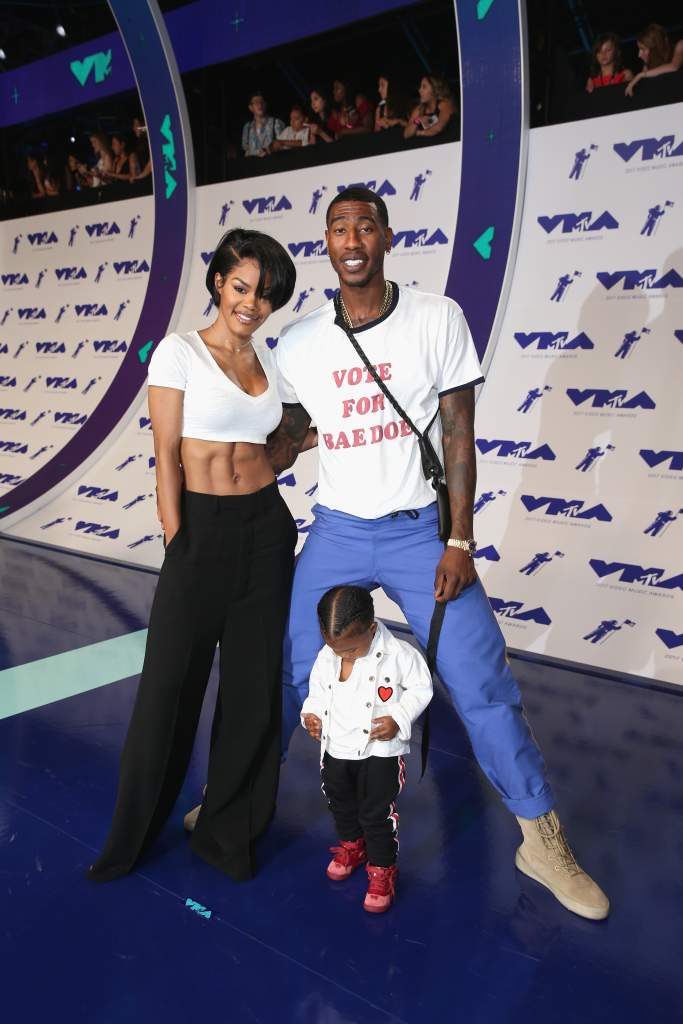 When Taylor was pregnant with her first child, she went into labor and had no clue until she felt her daughter’s head. In a post on Instagram, she opened up about the whirlwind birth and how Shumpert, who was her fiance at the time, helped her deliver the baby on their bathroom floor.

“On Dec 16th at 6:42am in our bathroom Junie decided she wanted to take her first breath into this world,” she captioned under a picture of Shumpert and a newborn Junie. “She came out as a wonderful surprise to everyone! Not knowing I was in labor until I felt her head…it took two ten count pushes with my fiancé playing Dr. and she entered this world into his bare hands! Eyes full of tears and barely able to speak to the emergency operator [Iman Shumpert] tied a pair of red headphones around the umbilical cord and the ambulance made there grand entrance 5 min later. She opened her eyes right away, gazed into mine and never cried! He handed her to me wrapped in our bath towel and wiped her face for me to see what LOVE really is.”

They tied the knot in 2016, according to Essence.

READ NEXT: Elijah McClain: 5 Fast Facts You Need to Know

We usually do not pay attention to the important matters. Instead we are worried...
Read more